Upcoming Nashville country artist Tim Buono released his latest single, “Trucks,” on August 6th under Asphalt Music Group. This song draws a playful comparison between the two things a simple country boy loves most: trucks and girls. “Trucks” is a tongue and cheek single in which Buono marries boldness and humor. The opening verse of the song paints the vivid scene of a truck coasting down the highway beneath the hot summer sun. The singer describes that his truck was “hot as a flame,” to which he exclaims “So I let her cool down, let the breeze blow in, I put two hands underneath her hood and man I got her goin’!” The release of “Trucks” follows Buono’s most recent single “Polaroid” in which the artist showcases a deeper, more vulnerable aspect of his artistry. The emotional single tells the story of Buono finding a box of polaroids in his grandfather’s attic just after he died.

Tim Buono continues to demonstrate that the music he has to offer is quintessentially country. “Trucks” is clever, lively, and humorous; the single delivers a classic country sound invigorated by a youthful edge. Charismatic vocals floating atop a powerful guitar and drum driven track make for the summer jam for any true country fan. Songs like this remind listeners why Buono has received multiple nominations for music awards; whether you are looking for a lighthearted jam to raise a beer to or soulful ballad, Tim Buono has the range to effortlessly deliver a spectrum of sounds for any mood. 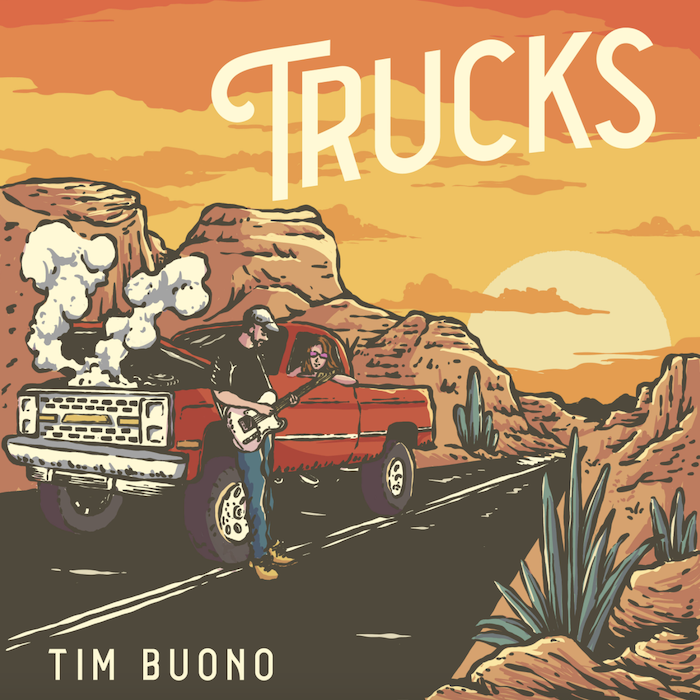 In the Spring of 2004, Tim and his Dad heard “Little Moments” by Brad Paisley for the first time and became instant, lifelong country music fans. After learning that Brad would be performing at a local venue that fall, Tim’s parents decided to surprise Tim with tickets to that show. After witnessing Brad’s incredible guitar skills live for the first time on September 26th, 2004, Tim knew, at nine years old, that music was what he wanted to do with his life. That Christmas, his parents bought Tim his first guitar and Tim has been hooked ever since. Tim tried taking lessons, but being a musical free spirit, the structure of lessons couldn’t contain his inner creativity. As a result, Tim has spent countless hours listening, observing, and recreating favorite country songs by artists that continue to inspire him. So much so that Tim has and continues to write both lyrics and music to many songs of his own. In the last few years, Tim has used social media to share his ongoing passion for music by posting covers where he has developed a steady following and Tim is also playing local shows where both his covers and original music are being warmly received. In June of 2015, Tim had the privilege of meeting one of his musical heroes, Dierks Bentley where he shared with Dierks his aspirations to have a career in country music. Dierks attentively listened to Tim and agreed to take a look later that evening at a cover Tim recorded on YouTube of Dierks’ hit, “Say You Do”. The next day, much to Tim’s surprise, Dierks tweeted “Hey [Tim]…saw your cover of say you do. good stuff dude. keep rockin and good luck!” and posted the YouTube link for his thousands of fans to view. When Tim’s phone started “blowing up” from the countless well wishes from those who saw Dierks’ post. Tim knew right then and there that country music would forever be a part of who he is.

Tim is now a Nashville recording artist who has been nominated for multiple music awards throughout New England, and continues to perform live throughout the region. In 2020, Tim signed with Asphalt Music Group based in Nashville, TN.