RILEY GREEN brings his WE OUT HERE TOUR to Nashville’s Ascend Amphitheater on Sunday, July 3, kicking off one of the largest Independence Day weekends in the country. Marking his first headline date in Music City since 2018, the ACM Award-winning hitmaker invites special guest SAMMY KERSHAW and newcomer MORGAN WADE to the celebration. Pre-sale and VIP experiences will be available tomorrow (2/23) with tickets for the general public going on sale Friday (2/26) at: https://www.ticketmaster.com/event/1B005C51CB4AA8C2. 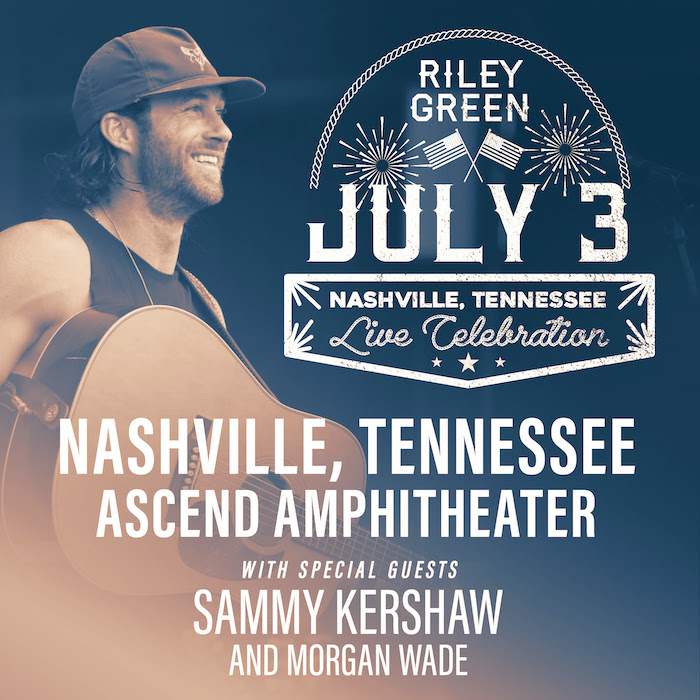 “It’s going to be a hot, Southern night with lots of Country Music and cold beer,” says Riley. “Nashville always throws one of the biggest 4th of July parties, and we’re excited to get things started.”

A musical perspective Rolling Stone deemed, “Drinks-in-the-air Nineties country at an Alabama vs. Auburn tailgate” is just the type of energy fans have come to expect from his shows. Raised in Alabama on the sounds of traditional Country, Bluegrass, and Southern Gospel music, Riley learned the spirit of songwriting and performing at a young age while spending time with his grandfather, Bufford Green, who ran the Golden Saw Music Hall. That stage laid a foundation for the songs Riley would craft in the years to come and values learned from another generation. MusicRow has praised his “great country vocal, honest presentation and true-to-life lyrics.” Fittingly, Riley shares co-writing credits posthumously alongside his two grandfathers on a track People heralded “might take him to a whole new stratosphere.” The PLATINUM certified hit “I Wish Grandpas Never Died” follows his PLATINUM-certified No. 1 “There Was This Girl” from his DIFFERENT ‘ROUND HERE album (BMLG Records) and fan-favorite “If It Wasn’t For Trucks.”

Amid wrapping his own WE OUT HERE TOUR, Riley will also join Luke Bryan’s RAISED UP RIGHT TOUR this Summer in the US before heading to Canada for shows with Luke Combs. For more information and upcoming tour dates visit RileyGreenMusic.com.