One of Country music’s fastest-rising stars and top Canadian touring artist, Brett Kissel, has joined the ranks of a growing list of artists bridging hip-hop and Country music. Collaborating with multi-platinum selling superstar Nelly, Kissel has announced a DND remix of his previously released Platinum-certified single “She Drives Me Crazy,” with the contribution of vocals from the artist undoubtedly known worldwide. “She Drives Me Crazy” is available now on all platforms HERE. 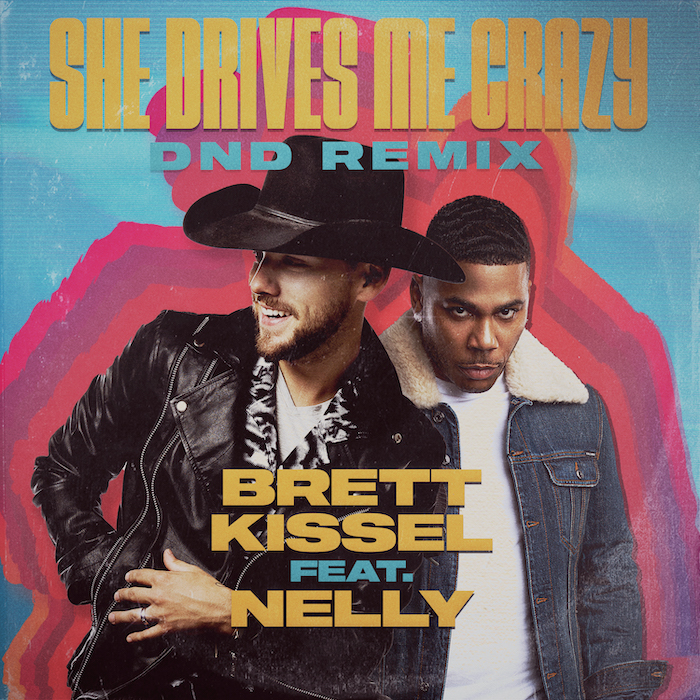 “She Drives Me Crazy” is an electric, upbeat party song that perfectly aligns with both artists’ ability to command the attention of a crowd. The new release is an extension of Kissel’s catalog and exemplifies his versatility as an artist. The song also features a high-energy dance beat and an infectious melody, telling the story of a narrator feeling like he’s lost his mind after a beautiful girl walks in and immediately captures his attention.

The collaboration came to fruition after fate brought the artists together in Music City. In 2019, Kissel wrote and recorded the track alongside Emma-Lee and Karen Kosowski in Nashville, Tenn. After the recording session for the track, Kissel wandered over to The Thompson Hotel, where he then ran into Grammy award-winning artist, Nelly. Having met Nelly before, Kissel approached the global superstar, told him about recording the song, and proposed a collaboration over drinks. Kissel followed up the chance meeting by sending Nelly the track, at which point he agreed to join Kissel on the project. Kissel shares his story about the coincidental run-in with Nelly that day and how the collaboration came to be HERE.

Kissel spoke of the track, saying, ‘It’s absolutely crazy how the universe works. We literally just laid down this complete banger of a track, and as I’m with my team in Nashville, we start talking about needing an epic collab on this, and we bump into Nelly right then and there. That was it – a conversation turned into dinner, drinks, and Nelly getting in on it. It’s such a great vibe, and we couldn’t be happier or more excited about this remix.’

While “She Drives Me Crazy” is Kissel’s first DND remix, Kissel is seasoned in collaborating with other artists. Over the years, Kissel has joined musical forces with Megadeath’s Dave Mustaine (“Damn”), Country music icon Charley Pride (“Burgers and Fries”), Carolyn Dawn Johnson (“I Didn’t Fall In Love with Your Hair”), and most recently Walk Off The Earth (“A Few Good Stories”).

In addition to the release of “She Drives Me Crazy,” fans are still buzzing about Kissel’s latest album release, What Is Life? Kissel released the album on April 9. Released on OneRPM, What Is Life?, is a 14-track collection of original material with ten musical compositions produced by Kissel, Bart McKay, and Jesse Frasure, and four short monologues reflecting on the title What Is Life? from Kissel and his children.

Brett Kissel is on Warner Music Canada and has had tremendous success in his home country. His charismatic personality, energetic stage presence, and music style have propelled him to the top of the Canadian Country music charts, with two Gold-certified albums, three Platinum (including the album version of “She Drives Me Crazy”) and eight Gold singles, and 15 top-10 radio hits to his credit. 2019-2020 was a storybook year for Brett, winning the JUNO Award (equivalent to the American Grammy) for Country Album of the Year and earning the Canadian Country Music Association’s Fans’ Choice Award, following a record-breaking 112-date tour that reached every single province and territory. In 2019, he completed two legs of his headlining tour, marked as Canada’s most extensive tour, selling out venues and reaching nationwide status. The Canadian Press crowned him “The New King of Canadian Country.” The accolades continued in 2020, when Brett was the big winner of the CCMA Awards, earning four trophies, including Fans’ Choice, Male Artist of the Year, and Album of the Year.

Kissel launched in the U.S. in the Fall of 2019 with the release of “Drink About Me.” The music video for the song featured Bachelor Nation fan favorites Kaitlyn Bristowe and Jason Tartick. The video premiered on Entertainment Tonight and garnered attention from PEOPLE Magazine, OK! Magazine, Bustle, E! News, and many more outlets. The music video received significant airplay on CMT Music, and since its release, it has garnered over 35 million streams.

As one of the top acts on the Canadian Country music scene, Brett Kissel is on the brink of becoming a household name across the United States. Having toured with Garth Brooks and Brad Paisley, the young entertainer is no stranger to the stage.